It is one of the most sought after sightings and something that many tourists coming from overseas sometimes think can be ordered on demand. But spotting a predator kill is actually quite rare and so there is no actual way to guarantee that you will see a hunt or a kill while in the park.

On the bright side though, the Kruger is packed to the brim with interesting predators, with lion being spotted in a great number. Large prides can be seen roaming the southern regions of the park with surprising regularity and if you know more or less where you can see lion, and if you know how often they need to eat and when, you can improve your chances of seeing these big cats enjoying a meal.

Spotting a lion is one of the most incredible experiences, and it is one that you will never forget. Thousands of years ago, lions roamed Africa, the Middle East, Asia, and even the Southern parts of Europe quite freely. These days you are likely to only see them in two places, and that is in a game reserve, like the Kruger, or in a zoo.

Lions are impressive creatures and the sight of them can make you appreciate their power and their majesty that little bit more. Seeing a lion kill is not something for the faint hearted and it is definitely not the sort of thing that everyone hopes to experience, but if you are curious and it is something on your must see list when you are travelling to the Kruger National Park, then this is what you need to know about the lion. 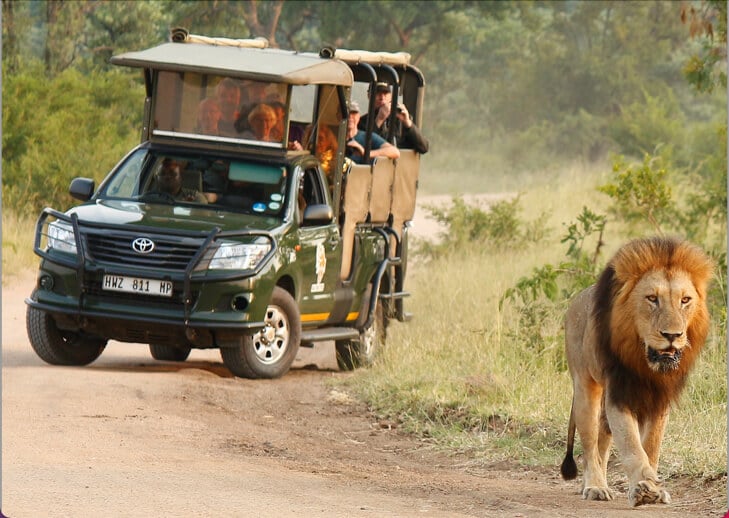 How often does a lion hunt?

Despite their impressive size, a lion only needs to eat every 3 to 4 days, but they need to eat the equivalent of about 5 – 7kg of meat each day. Generally, a lion can go around a week without food, but when they do get the chance to eat, they can munch down around 50kg!

Lions can hunt either on their own or with their pride. Although the male lion is often teased for being lazy during the hunting process, they are usually the ones who drive prey towards the females who then pounce.

What prey do they hunt?

Lion are able to take on all sorts of prey. They generally favour all types of antelope, but contrary to popular belief, they are not so fond of impala. They also tend to take on giraffe very rarely, which you can understand when you see the size of a giraffe compared to a lion.

The gender of the lion can also determine which type of prey they go for. A male will be more inclined to take on a buffalo, which is a seriously dangerous conquest, while the females will usually go for zebra and wildebeest.

If you were to travel during a drought season, you might be more inclined to see lions go on a bit of a hunting spree, because they take a meal when they can get it.

There is no sure fire way to see a lion hunting, but you can increase your chances by going on a Kruger Park safari.