The White Rhino is the third largest land mammal in the world. These wonderful animals have massive and stocky bodies with a reputation of being less aggressive than the Black Rhino. Bulls have been recorded weighing up to 2 000 Kg and standing at 1.58m at the shoulder. Their massive horns are made of densely packed fibres and are not actually bone. They have a grey skin that is mostly hairless. It has a wide, square lip that also gives it its name. The White in White Rhino is derived from ‘Wyd’ which means wide in Afrikaans and Dutch.

White Rhino are strictly grazers that favour short grass but will feed on tall gras if need be. Their wide lips allow them to easily grab grass in clumps to eat.

White Rhinos are not seasonal breeders and even though breeding takes place in the wet season. Calves are born after a gestation period of 16 months during the Dry season.

White Rhinos as well as Black Rhinos’s numbers have been lowered significantly because of poaching. Very few rhinos are found in the wild as many have been relocated to wildlife preservation reserves to slowly help increase their numbers. White Rhinos prefer savannah grasslands with some good cover by trees. 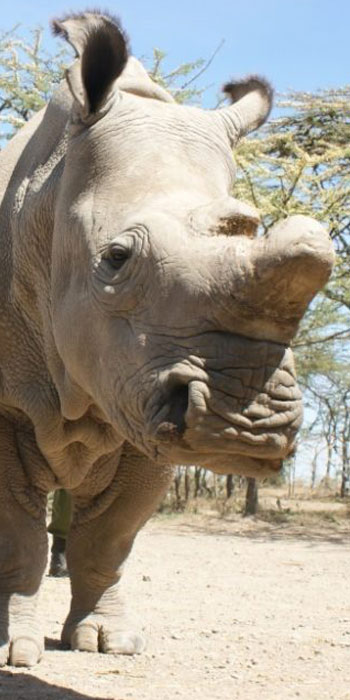