When you book with an account, you will be able to track your payment status, track the confirmation and you can also rate the tour after you finished the tour.
Sign Up
1805
Book Today
9 Days
Windhoek
Hosea Kutako International Airport
Min Age : 8 years
Info
Itinerary
Accommodation
T's & C's

Namibia is unlike any other African destination. Namibia is the ultimate African road trip destination for intrepid adventurers, with its almost otherworldly dune landscapes, ancient deserts, and amazing game viewing opportunities.

Our plan is contingent on the availability of the required lodging, pilot, and aircraft.

Arrival at Windhoek International Airport and switch (at your expense) or pick up your rental car (at your expense) at the airport. After that, you can either book a (non-clouded) city tour or explore the city on your own.

Stately historic buildings in the German architectural style of the turn of the century add a lot to the area. We tour these historic structures, which add to the city’s unique charm, including the historic seat of government, also known as the “Tintenpalast,” which translates to “palace of ink” in German. The Christuskirche, which stands next to the Tintenpalast and has a graceful sphere, is a striking landmark in the region. The country’s past is reflected in the white-walled Alte Feste, which was once a fort and is now a museum. Windhoek is located at a height of 1650 meters above sea level. Despite the fact that Windhoek has a population of only 300 000 inhabitants, it is Namibia’s largest city. 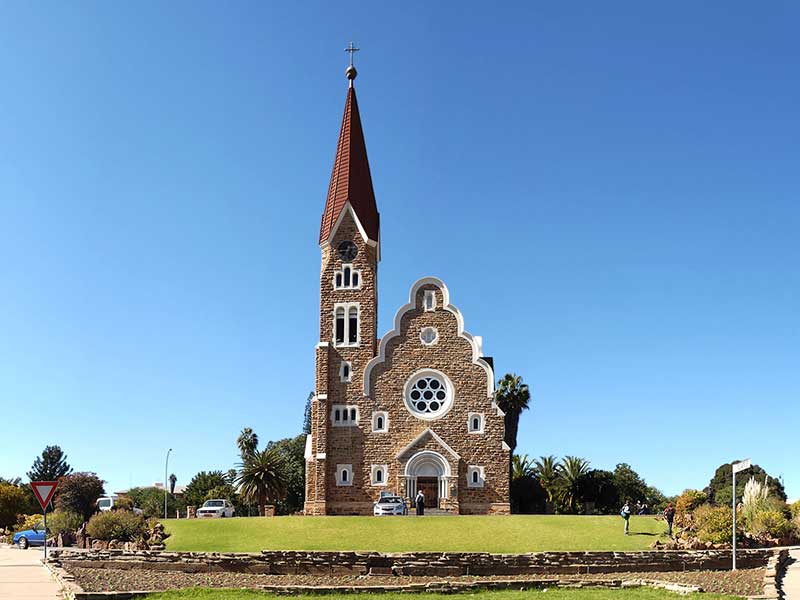 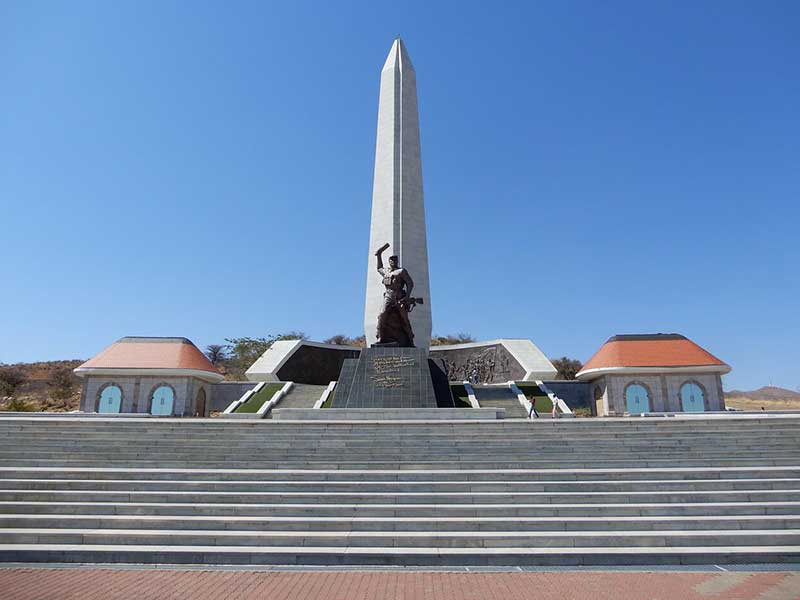 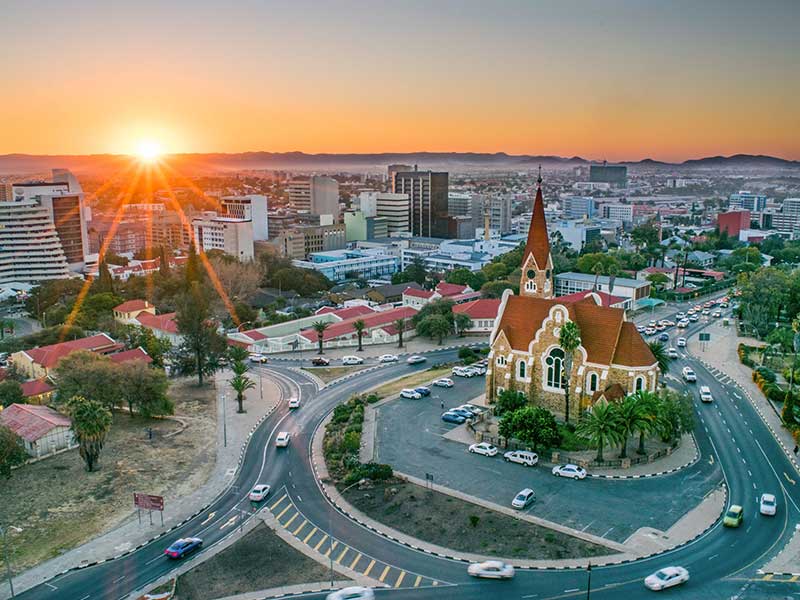 Depart early from Windhoek for the Hammerstein Lodge, where you can spend two nights. On day 3, you will have the opportunity to scale one of the world’s highest sand dunes.

Sossusvlei is a dune wonderland with 300-meter-high dunes surrounding a massive, dried-up pan. The rich tints of the dunes range from pale apricot to bright reds and oranges, and they stretch as far as the eye can see. The Tsauchab River flows into the pan during a successful rainy season, creating a haven for water birds. Oryx, Springbok, and Ostriches can be seen feeding on the sparse vegetation along the waterways even during the dry season.

A visit to the Sesriem Canyon can be added to this.

Sesriem Canyon, at the entrance to Sossusvlei, is a 1km-long narrow gorge carved out by centuries of erosion. Deep pools of water can be found at the bottom of the gorge, which drops 30m to 40m and is replenished after good rains. The name Sesriem comes from the time when early settlers drew water from these ponds by tying six lengths of rawhide thongs together.

B&B, Hammerstein Lodge, or something similar. 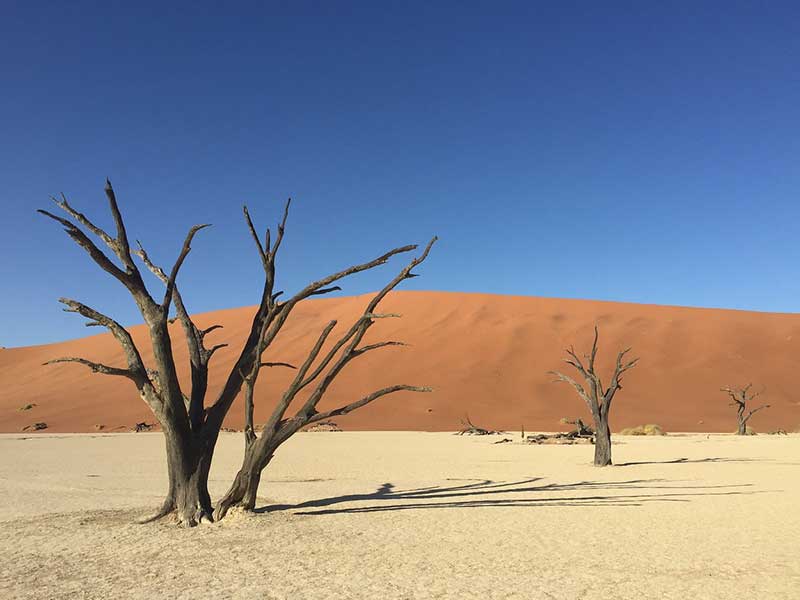 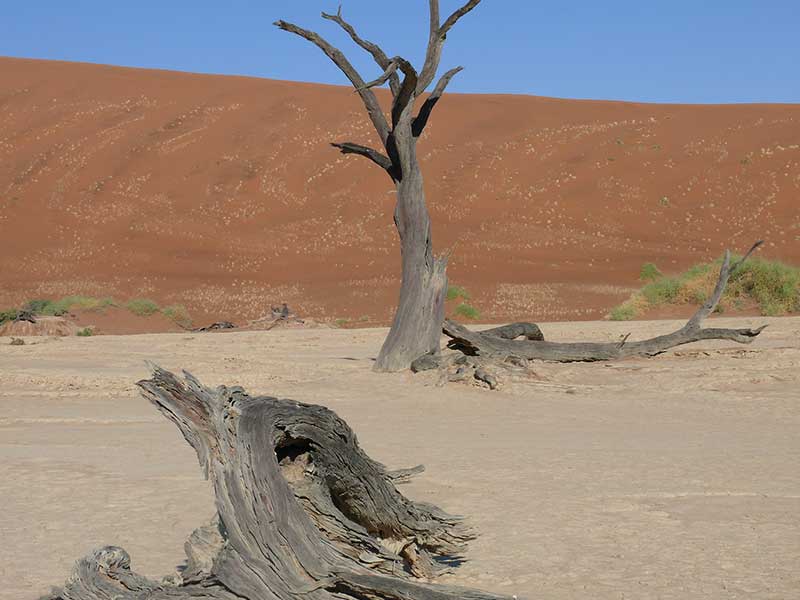 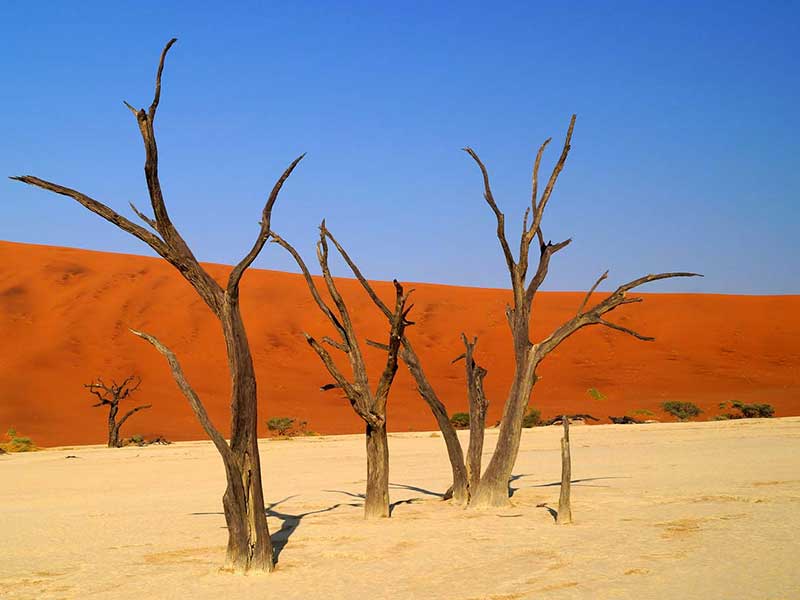 After a hearty breakfast, travel to Swakopmund via Walvis Bay. Check in and relax for the rest of the day.

Namibians consider Swakopmund to be a welcome respite from the inland sun. It is also well-liked by tourists due to its old-world charm and laid-back atmosphere.

It was founded in 1892 during the German colonial era and served as the territory’s main port for many years. The distinctive German colonial character has been well preserved, and many of the old buildings are still functional today. The Woermann Building, which was built in 1905, now serves as an art gallery. Previously, the Woermann Tower was used to keep an eye on ships entering the harbor. Such historic buildings worth visiting include “Die Alte Kaserne,” “Hohenzollern Haus,” and the Railway Station House.

Breakfast at the Hotel Pension Rapmund or a similar establishment. 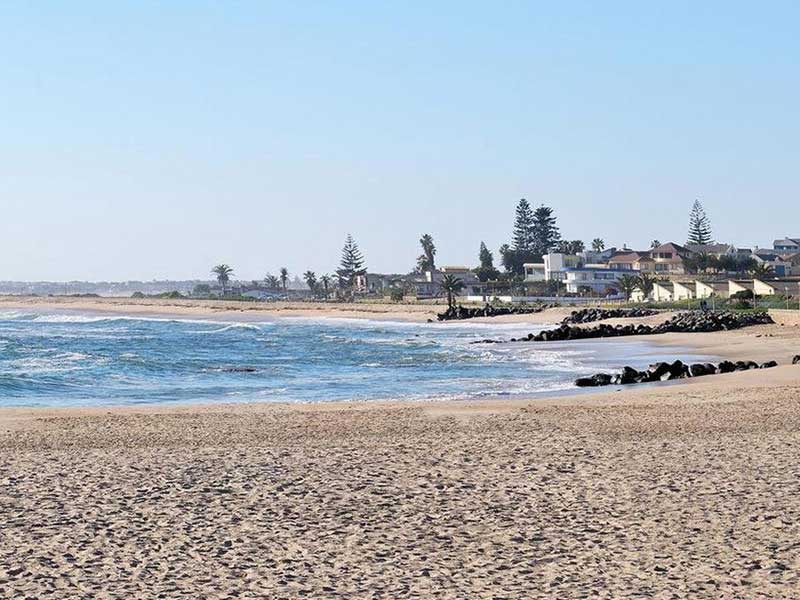 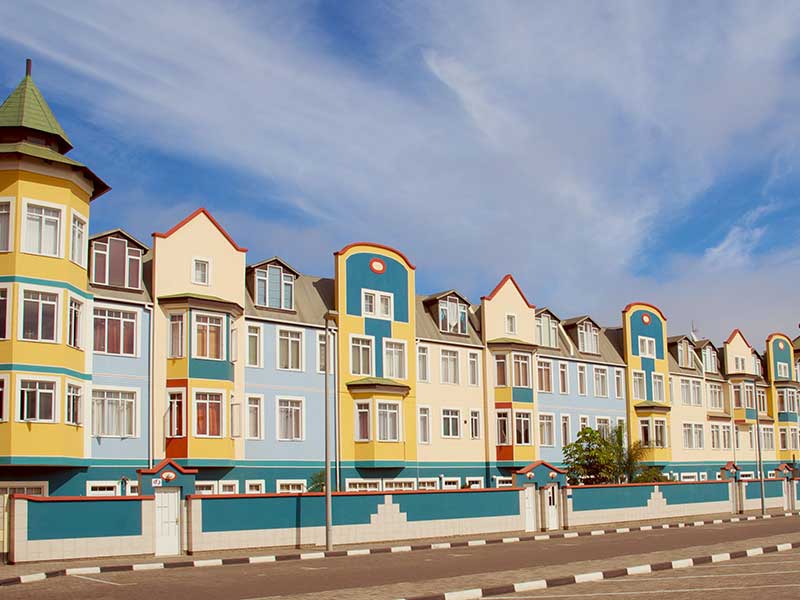 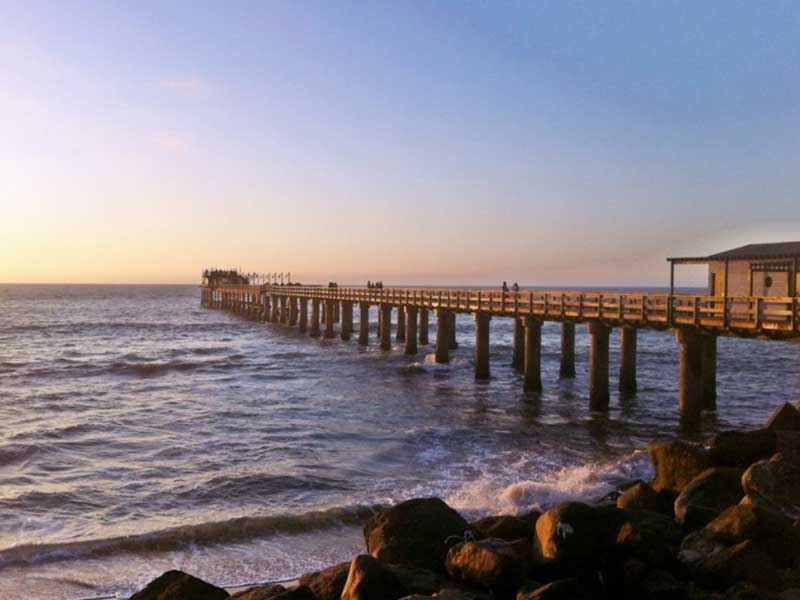 You can now book activities along the coast (such as boat cruises, living desert tours, quad biking, camel riding, gin drinking, and so on) or simply relax. The rest of the day is free for you to relax or explore Swakopmund on foot.

You depart from Usakos, Omaruru, and Outjo for the Toshari Lodge after a hearty breakfast.

Check-in is delayed due to late arrival at the cabin. 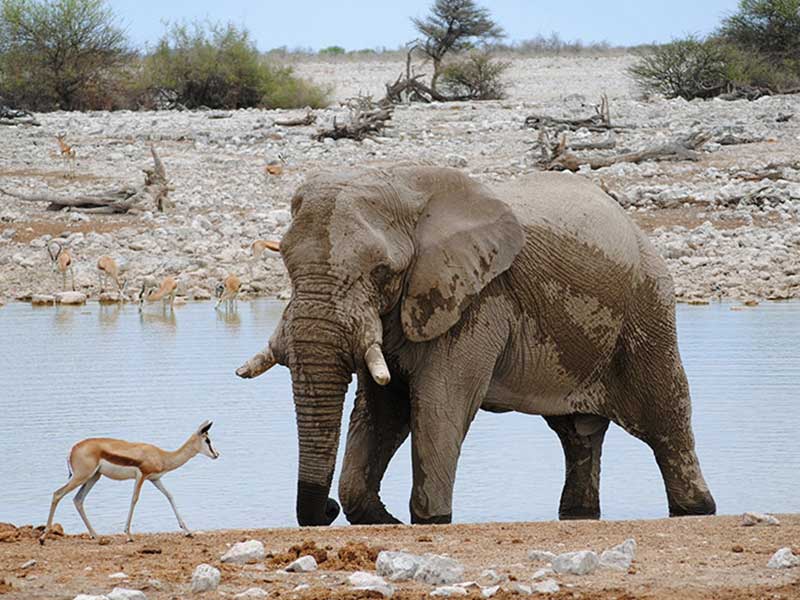 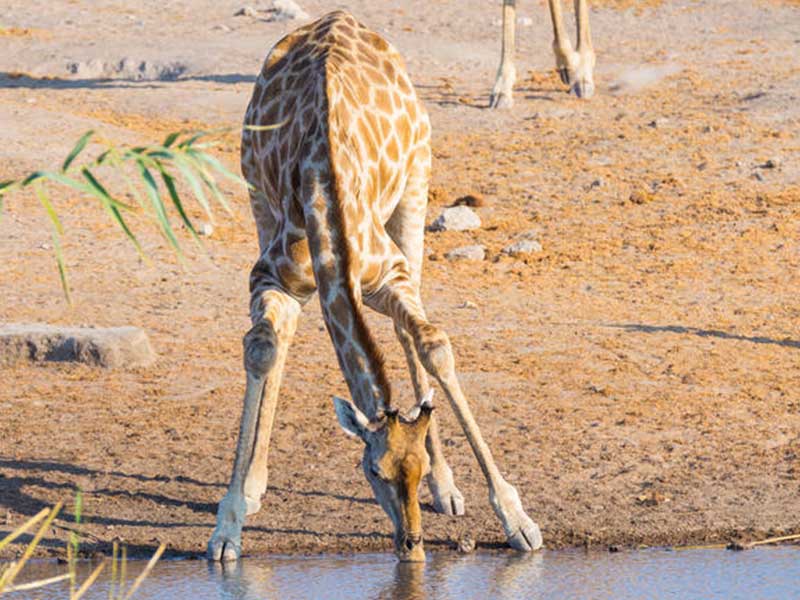 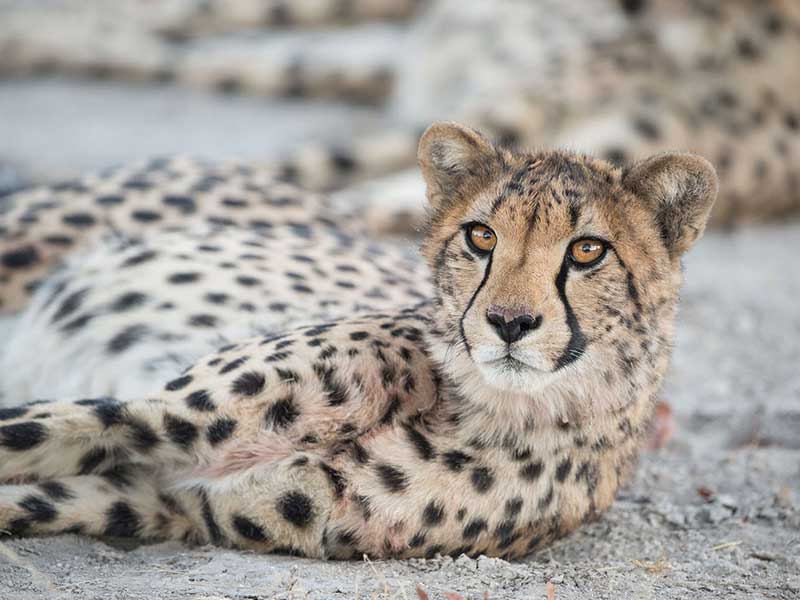 You can either drive into the park early in the morning in your rented car or book a game drive from the lodge (at own cost).

The Etosha National Park is one of Africa’s largest parks, covering 22 270 square kilometers of saline desert, savannah, and woodlands. The Etosha Pan, a large, shallow depression covering approximately 5000 square kilometers, is its defining feature. The pan is a desolate expanse of white broken mud that shimmers with mirages on most days for the majority of the year. The Etosha experience is unlike any other, with huge herds of game and the eerie “great white place of dry water” as a backdrop. The park is home to 114 animal species, including some uncommon and endangered species like black rhino and  black-faced impala. The park is home to over 340 different bird species.

You leave the park before dark in the late afternoon to return to the cabin.

Toshari Lodge or a similar lodge, bed and breakfast. 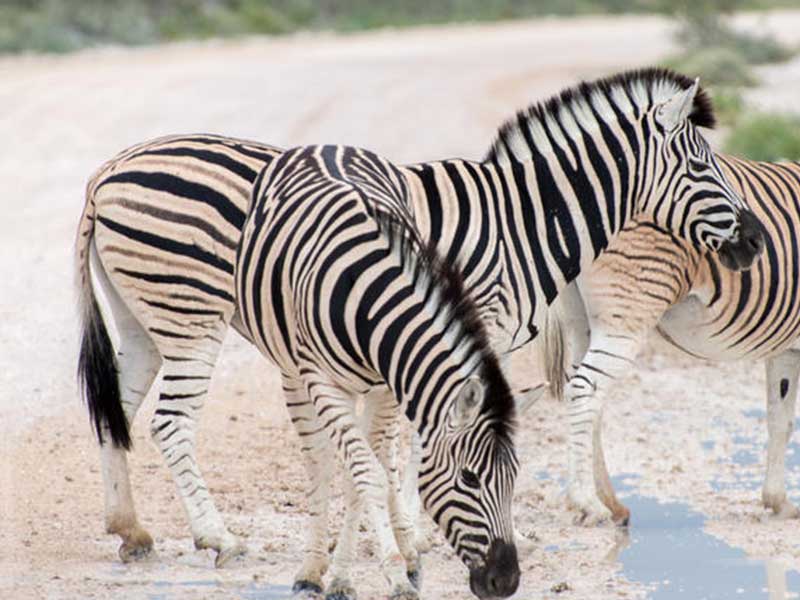 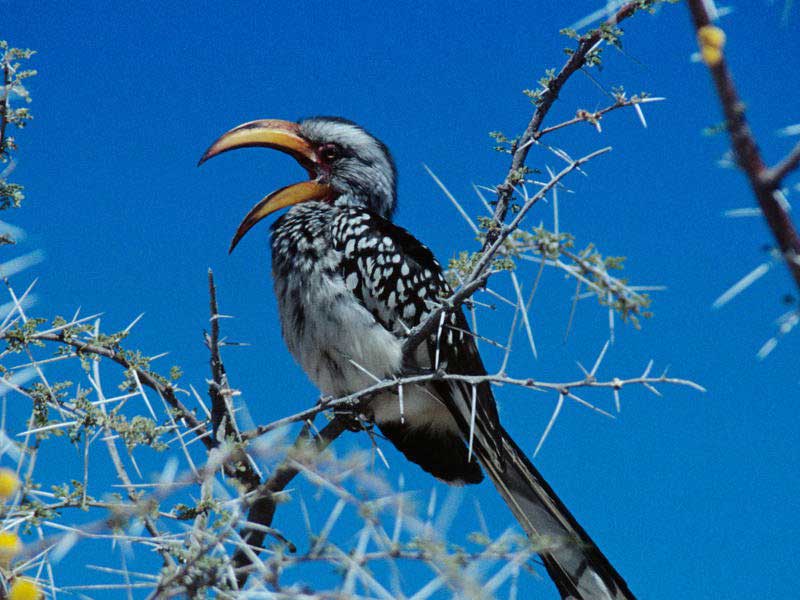 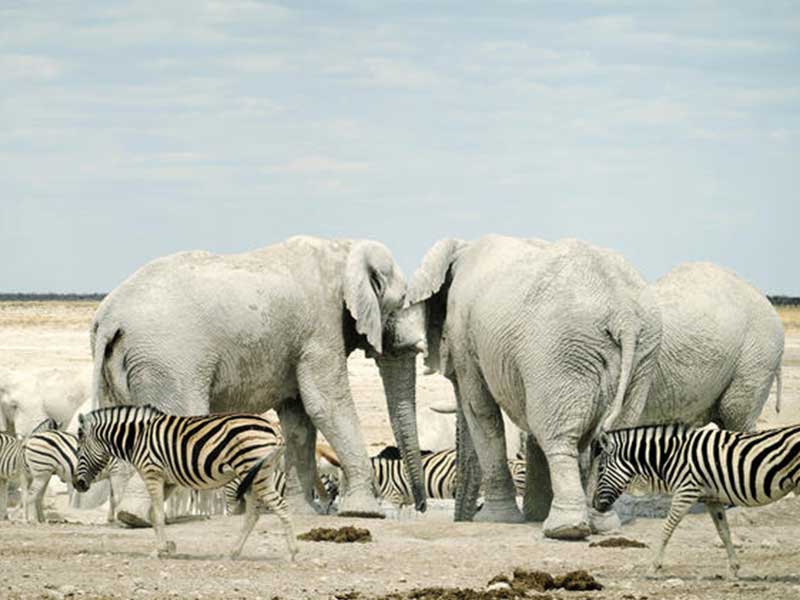 After breakfast, you proceed back to Windhoek via Okahandja.

Directly north of Windhoek lies Okahandja, a town of great significance to the Herero because it was the seat of Chief Samuel Maharero. Every year in August thousands of Hereros gather here for a pilgrimage to pay homage at the graves of their great chiefs. Okahandja is an important centre for woodcarvers from the north. 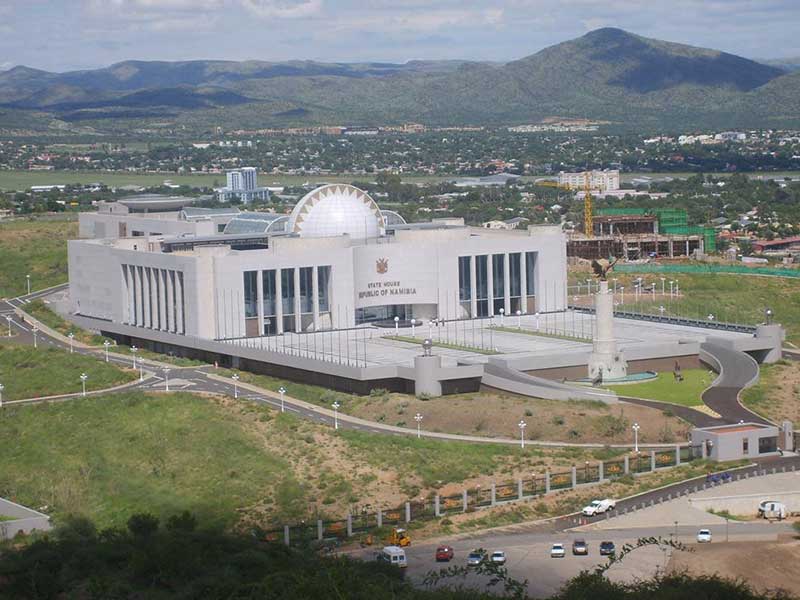 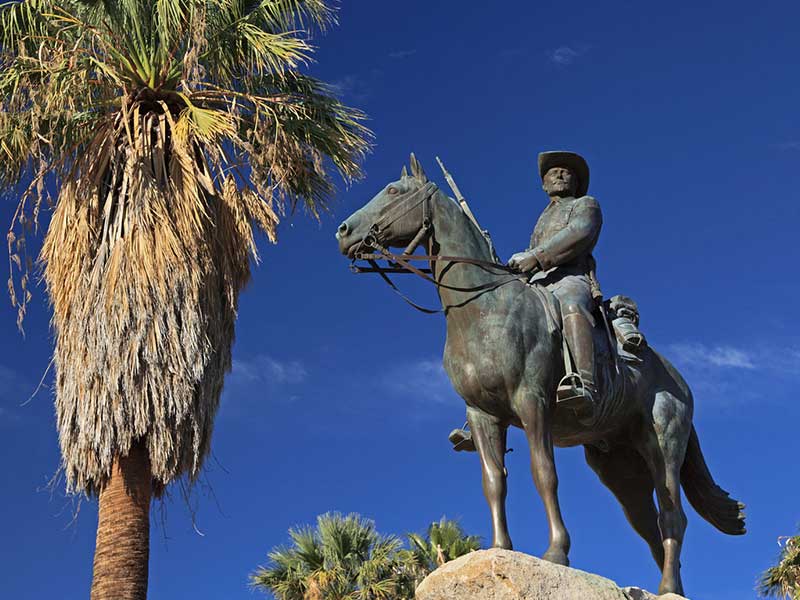 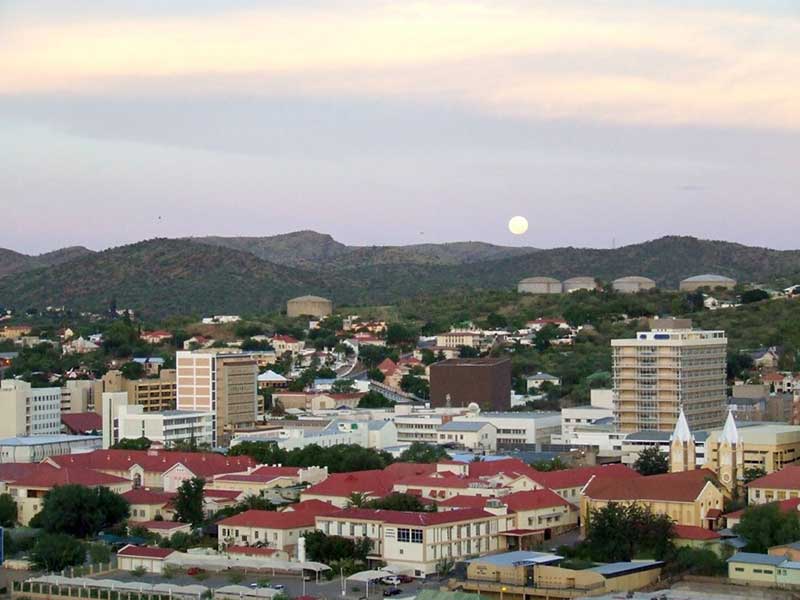 Breakfast. Depending on your flights, you can return the car rental vehicle the previous day already and book a transfer out to the airport for your return flight today.

We look forward to welcoming you back to Namibia!

Hammerstein Lodge is a gateway to the Namib in close proximity to the beautiful red dunes of Sossusvlei (60km from Sesriem). The area is renowned for its rocky outcrops of massive granite boulders and the lodge gets its name from one enormous rock that is shaped like a hammer. Hammerstein Lodge & Camp offers sundowner drives into the mountains, sightseeing flights as well as 4×4 trips to Sossusvlei on request.

Established in 1968 by the Rapmund Family the Hotel Pension Rapmund continues to be a family run hotel. As from 2008 the new owners Sonja and Enjo Mueller have been operating on a family oriented basis.

Enjoy a hearty “German” breakfast in a friendly and personal atmosphere, with a view of the ocean. The Hotel’s central location provides great access to the heart of town and the beach.

Nestled on an outcrop of dolomite rocks, under a forest of Mopane and white Seringa trees, Toshari Lodge offers affordable but enchanting accommodation close to Etosha National Park. A warm welcome awaits you complimented by a refreshing cold drink on arrival. Absorb the peace and tranquility of the natural African bush as you amble through a blend of manicured lawns and rustic bush gardens to your private room. Take a refreshing dip in the sparkling pools and enjoy wholesome Namibian cuisine, complimented with herbs and vegetables from the garden and fresh home baked bread, in the tranquility of the striking African Lapa with its stunning photographs of local Etosha wildlife. Campsites are also available; each pitch having a private shower room with hot and cold water, 220v power point, herb garden and braai place. Situated just off the C38 between Outjo and Okaukuejo, Toshari Lodge is ideally positioned for day visits into Etosha National Park; on your own or on the expertly guided tours.

See your doctor for advice in regards to vaccinations and malaria prophylaxis.

Travel and safety information and advice is based on information received from the various Southern African tourism boards of the countries we trade and operate in, and is deemed as correct and up to date at the time of publish. A guarantee of accurate and complete information, as well as a liability for any occurring damages and / or changes cannot be applied. 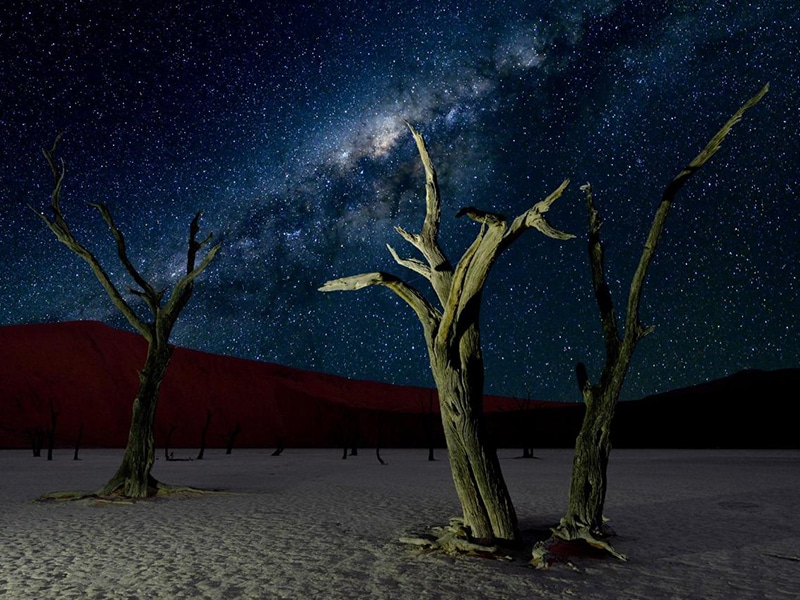 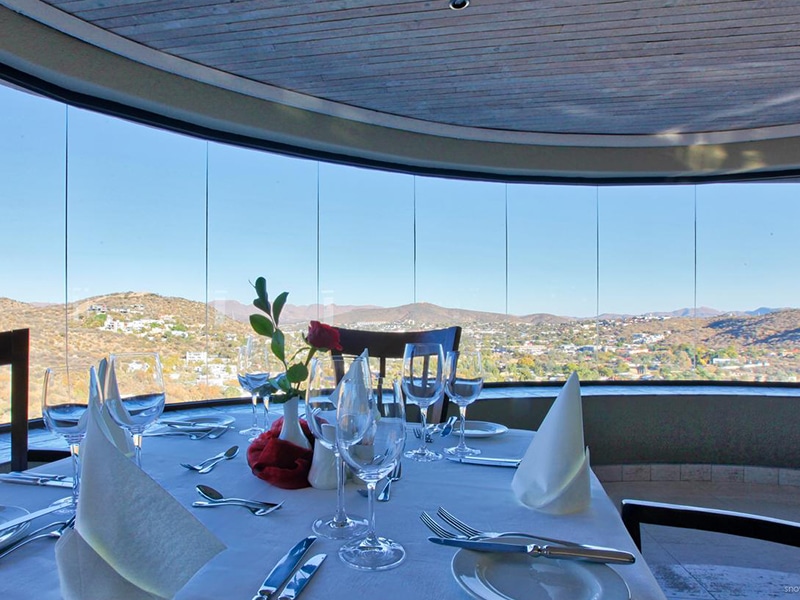