The Kruger National Park has a bunch of beautiful animals and well known animals like the Lion, Buffalo, Zebra, Eland, Elephant and many more. The Kruger National Park as a famous group of animals called the Big 5, a collective of the Elephant, Rhino, Leopard, Lion and Buffalo. The Kruger Park actually has a much smaller version of the Big Five. Let us explore the Little 5 and who is art of it.

The first of the Little 5 is the Ant Lion, The tiny version of the Lion from the Big 5. The Ant lion is a species of ant that lives in very soft sand. These insects burrow deep in the sand creating a cone that leads to the antlion’s nest. The sand in the cone is extremely loose that makes it almost impossible to climb back out. The insects fall to the bottom of the cone where the mandibles of the Antlion are waiting. When at rest camps, if you look carefully, you can see multiple cone holes in the sand where Antlions lay and wait.

The Ironic swap from the Big 5’s Leopard, which is a fast and powerful animal, the Leopard Tortoise is a very slow and unimposing animal. It gets its name from the spots and the colour of its shell. The Leopard Tortoise is the fourth largest species of tortoise in the world that can live up to 100 years old. 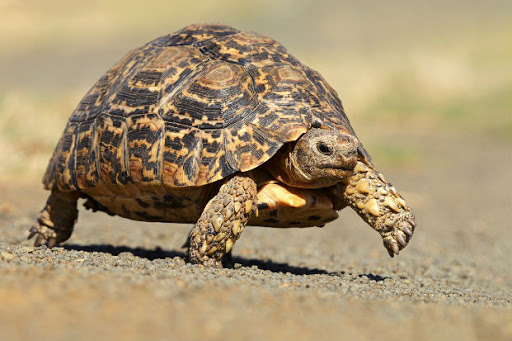 The Red Buffalo Weaver is a member of the weaver family of birds that is known for building beautiful nests that are made out of sticks grass and reeds. The buffalo weaver has a black body and red beak. It can be seen sitting on the back of rhinos, buffalos and wildebeest, picking ticks and bugs from the body. The Buffalo Weaver is a rather common bird that can be found in the Kruger National Park sitting on multiple large animals like the Rhino, Buffalo, Elephant and other larger animals,

The Rhino Beetle is the smaller version of the Black Rhino of the big 5. The Rhino beetle is one of the strongest species of beetles in the world. The Rhino beetle can go by many names, including the Hercules Beetle, Unicorn Beetle or horn beetle. These beetles come in a large variety of shapes and sizes, some of the unique looking species include the Atlas Beetle, Elephant Beetle and Ox Beetle. The Rhino Beetle that is a member of the Tiny 5, has a larger horn that extends from its forehead and a smaller horn that extends from his “nose’.