When on any of the Kruger National Park safaris, guests can see all kinds of animals including the famous cheetah.

The cheetah got its name from the Hindi word “Chita” which means “Spotted One”.

The Cheetah is not part of the Big Five but is equally as amazing.  This animal is built for speed and is the fastest land animal reaching speeds of up to 114km/h.  This top speed can only be maintained for about 250 meters, after which the cheetah needs to catch its breath.  The cheetah has a build like a greyhound but with much longer legs.  It has a big heart, lungs and nasal passages.  Cheetah weigh in at around 40-60kg and are slightly taller than leopards.  The cheetah does not climb trees like the rest of the cat family as they have non-retractable claws similar to that of a dog, giving it an added advantage when chasing down its prey.  This allows the cheetah to not have to get close to its prey like a lion or a leopard but can make chase from a distance.

Cheetah hunt by day, and can start the chase from 100m from its intended prey and will within seconds be racing at full speed.   Using its long heavy tail as a stabiliser, the cheetah gives chase with a single minded aim, anticipating the moves of the prey.  When the cheetah deems the moment is right, it will knock the prey off balance and go straight for the throat.  They do not kill as effectively as lion or leopard, as the cheetah’s jaw and teeth are smaller than the leopard or lions and it can take up to 25 minutes for the prey to die.  Once the prey is killed the cheetah needs to rest before devouring its prey and it is then very often the lion, or hyaena will come and steal the cheetah’s kill.  Cheetah will normally eat their kill at the kill site. 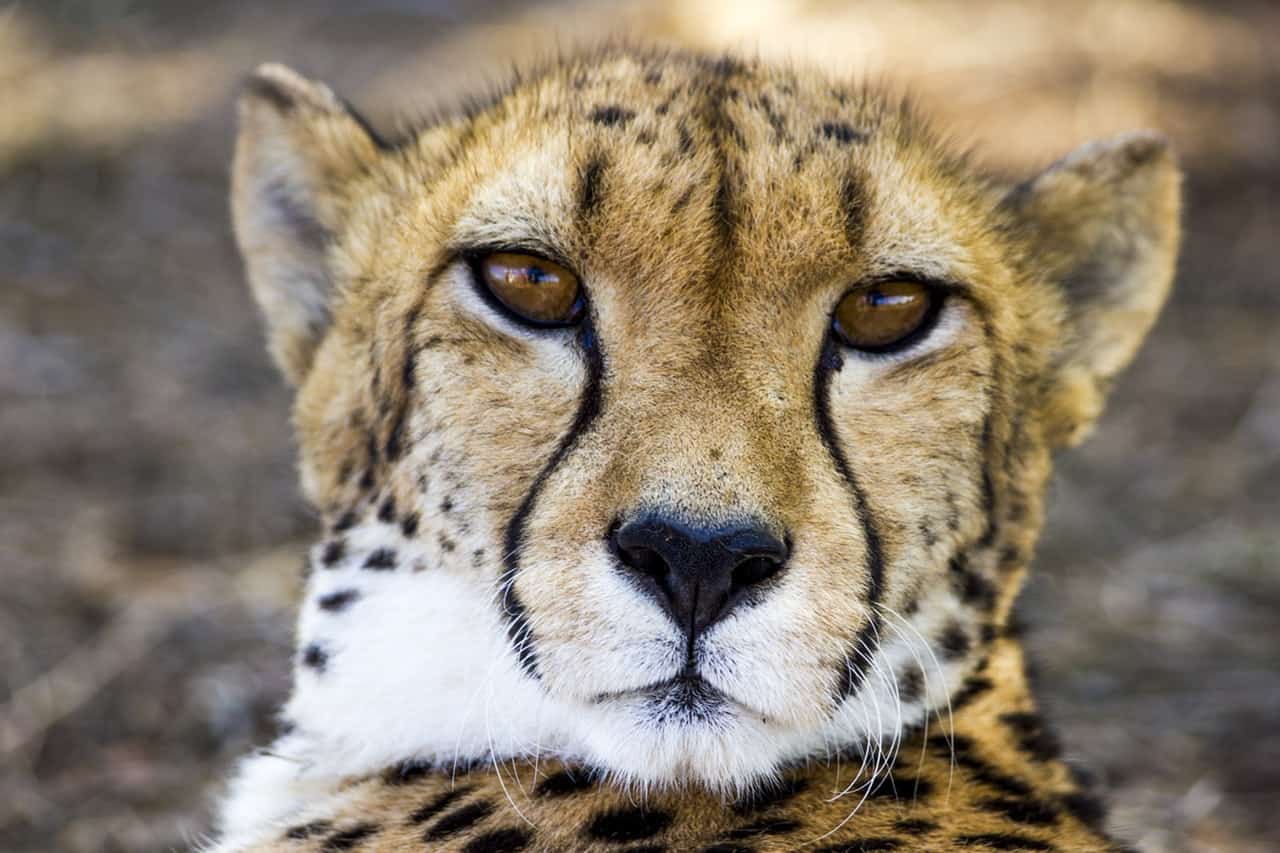 If their prey is not taken by surprise, they have a one in ten chance of catching it.   However should the prey be caught off-guard, the odds are upped to one in two chances.  Of the big cats, cheetah are the more timid and in Southern Africa, there is no record of a cheetah attacking a human.

Cheetah are known to mark their territory, but rare actively defend it.  Cheetah can be seen in small groups but this is usually with their brothers and do not form prides as lions do.  Cheetah are an endangered species and this has nothing to do with their ability to reproduce.  Cheetah are not born fighters and when the mother has to leave her cubs to go hunt, cheetah cubs often fall prey to lion or hyaena’s, and up to 90% of baby cheetah die within three months of birth.  Cheetah are also born with weak, underdeveloped immune systems and when this is the case, cubs rarely make it past one month old.  When the cubs are born they have a mantle of fur from the back of their necks to their rumps aiding to disguise cubs in the grass.  Although the cubs leave their mother at about two years, they may stay together for several months.   In the wild cheetah can live up to 15 years.

See all that the Kruger has to offer by booking a Kruger National Park safari with Kurt Safari.