The common Duiker is a really shy, tiny antelope where only the male has a set of very small horns. Just like the name, the Duiker has as habit of running away, making a series of diving jumps into the bush. These tiny antelope stand at 500mm at the shoulders and weighs an average 19 kg. Males are slightly smaller than the female and also weigh less. The colour of the Duiker varies from species to species, from reddish for the Red Duiker to greyish for the Common Duiker. With a mostly white underside, a black band around its face and nose.

The Duiker has a wide range of leaves, trees and bushes that are in their diet. Duikers also eat fruits, seeds, roots, fungi, flowers and even carrion and maggots.  Unbelievably the Duiker is one of the few antelope to also consume meat.

There is no breeding season for the Duiker but after a gestation period of 6 months, the Duiker will give birth to a single offspring. The young mature after 7 months and the female are sexually active after 8 or 9 months. Females only give birth once a year and birthing reach a peak during the summer. The females hide in thick vegetation just before they give birth to protect themselves and their young. The young are fully developed after 14 hours.

Duikers are active during the late afternoons and early nights with some being active in the early mornings. Both males and females are highly territorial, often chasing away members of the same gender. Males and females will often share territories but will not interact wit each other unless it is mating season. Duikers are solitary animals and are often on their own or with their young. These animals are important prey for medium sized predators.

Found all over South Africa, the Duiker loves scrub country. Because the duiker is such a small animal that falls prey to many predators, it avoids the open grassland areas because they lack significant cover to hide from predators. Duikers aren’t found in forests but are known to hide between the trees to find cover. These little antelope are a common sight when on a Kruger Park Safari.

Duikers fall prey to many predators like Lions, Leopards, Cheetahs, Hyenas and Wild Dogs. When predators or any other animal threaten the Duiker, it will lay quietly in one place or stay motionless in one place. When in danger, the Duiker will release a nasal snort, and bleats loudly to call nearby Duikers to help it. 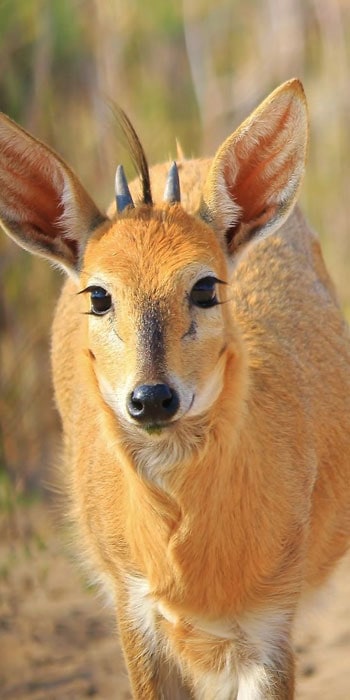